As I mentioned on my farewell facebook status to the Mental Health Center of Denver, this job provided me with stories like I could never have imagined. And as a story-teller, that is truly a gift! And so, in honor of my departure from a place I really loved, here is a recap of the blogs that came out of this job, these people, those experiences.

From the time I realized that, as a case manager, I would very much like to have one myself:
please, someone, manage my case

From the time I learned that sometimes people just need to sing a little Whitney Houston:
help isn't always professional

From the time I locked my keys in my car and - thank goodness - the fire station was conveniently located right across the street from our office:
game changers

From the time it was insisted I take a handful of root beer barrels:
for just in case you get nervous

From the time I realized my co-workers really knew me:
I'm an easy read

From the time being known by a co-worker helped me start to be fine:
fine or not fine, here goes nothing

From the time I got licensed and started asking what would come next:
no but seriously, what do I do now?

From the time I realized caring began when mental illness had faces:
things that don't have faces

From the time I was in the Denver Health waiting room and, after feeling embarrassed by a client's honesty, I realized that honesty shouldn't be embarrassing:
honest does not = embarrassing

From when I knew that my new co-workers were going to be my for-real friends:
I can tell that we are gonna be friends

I am not just me

This is a post I wrote in 2011 when I was leaving my old job(s) to start at the one I've had for the past few years. And now, as I have officially wrapped up my last days at the Mental Health Center of Denver, I am having all the same sadnesses. Though transition is necessary, this change is good, and I am excited to be starting a new job on Monday, I am having some emotions about leaving this one.

Back in 2011, I complained so much about being unemployed. Not just occasional whining, not just "I have nothing better to say" complaints but genuine, heartfelt, deeply rooted complaint. So as the deeply transitional part of my life wrapped up, as I quit nannying and working part time at a million places, it came as quite a shock to learn that I was actually going to miss some of the things I'd been whining about. I was going to miss the baby, even though he could be tyrannical in ways I did not know babies could be. I was going to miss the Hedge Fund even though I still didn't really know what it was and I hated loading printer paper and my hands were always paper cut from filing.

So I fully understood that I sounded ridiculous - after being ready for a change for so long, finally getting what I wanted. I was very excited to have a job. And to the people who had fallen victim to my whining, I apologized in advance for the M. Night Shyamalan plot twist I was about to throw at them.

Even though I'd been dying to move on, as it turns out, I was also pretty sad about moving on.

Here is a fact about what it is like to be me: I am an attacher. I get attached. After prolonged periods of time with other humans, I find myself often inexplicably attached to them. It doesn't matter if they are tiny and refuse to take naps or if they are brusk money-handling types or adults with severe and persistent mental illness and a lot of needs they are looking at me to help them meet. It doesn't matter if they are normal or exciting or a lot to handle or wah-wah debbie downers.

When it comes time to leave them, I'm going to have to give myself a second to grieve it.

The annoying part is that I always forget this about me. At each transition, then, I almost always find myself caught off guard by it. When I got sad 3 years ago about leaving the babe, I remember wondering to myself if this attach-y way of being was really good, in the end. Maybe transitions don't have to be this hard every time. Maybe I can fix this about me.

But the thing of it is, wrong or right, I like it about me. I like that I get attached. I like that I feel the absence of people when they're not around anymore because it means they meant something to me when they were. I like that when I say goodbye [even if it's just an I-won't-see-you-all-the-time-anymore goodbye], my heart feels a pinch that stings for a while. There comes a time to move on, and I usually can. But the person I am right now in this moment, this person who interviewed for and was offered and accepted a big girl job and then stayed for some years until it was time to interview for and accept another one, that wasn't just me as I am right now in this moment. 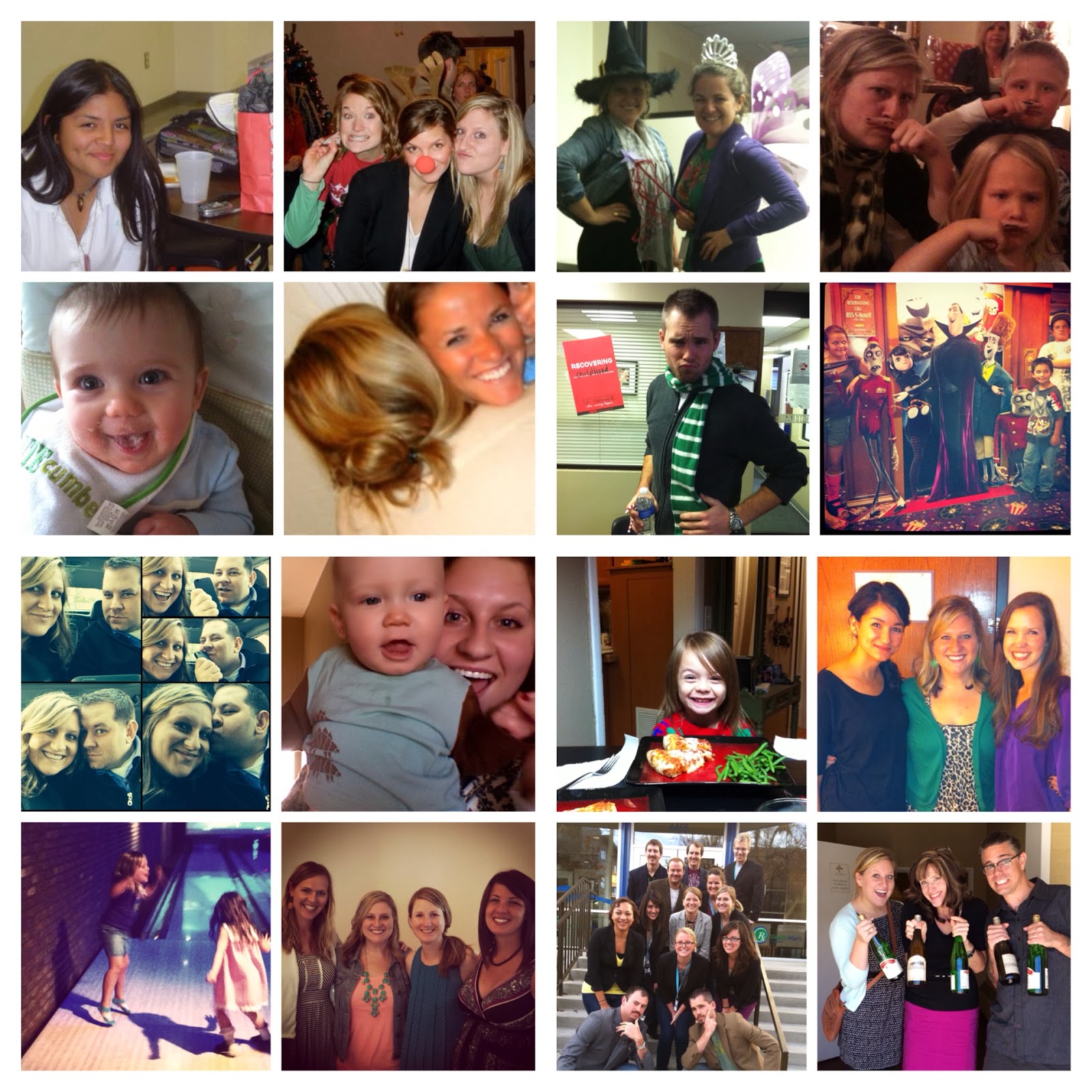 It was Suzie's mentor. Bodie, Andrew, Gabe, Sara, Christina, Micah, Lucy, and even Luke's nanny. The hedge fund's trusty paper stacker. The most paranoid part-marker Weaver Manufacturing ever saw. It was my childhood best friend and the girl who bullied me in middle school art class and a bunch of roommates and the kid I taught how to fist bump at First Pres. It was the old lady who wanted help deciding [for hourssssssss] if she should buy Matchstick or Bootcut cords at JCrew. It is 20-something people's case manager and bonafide mental health professional. It was everyone I've ever been attached to and it was a bunch of jobs I maybe didn't always love with a bunch of people I definitely did. My point is, I did not grow up in a vacuum, but surrounded by people [for better or worse] who meant something.


I am not just me. Or at the very least, I didn't get to be me all by myself.
And I don't think I want to change anything about that.
Posted by auntmeggie at Sunday, January 12, 2014 1 comment: Links to this post