romance, where I am

Last weekend I rode a train.

I've ridden a train once or twice in my lifetime, I think, but it certainly isn't my typical mode of transport. I didn't even so much realize trains were still a thing, except I was pretty sure I'd heard my brother talk about taking them sometimes when he lived in Chicago. But when my plans to drive to the mountains last Saturday were seemingly foiled by a snow storm [which really didn't end up being all that storm-y, but whatever], I booked myself a seat on the Amtrak. I set off that Saturday morning in the snow, unsure of pretty much everything about train-travel, filled with as much nervous excitement as I could muster before 8 am. 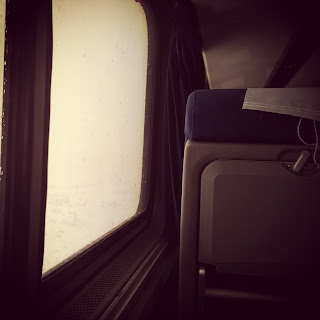 I will enjoy almost anything that makes me feel like I'm a character in a novel, and this was exactly that feeling. I was given a ticket at the station [on which my assigned car was written by hand!], located my designated seat on the aforementioned car, and sat down. The conductor, a jokey old man wearing the hat and everything, came by to check my ticket and wish me a nice ride. I heard: Breakfast is being served in the Dining Car, just three cars back before the Sleeping Car! as it was announced over a tinny loudspeaker and I about thought I'd died and gone to heaven. As the train pulled away from the station, whistling just like in the movies [Taffeta, darling...], leaving Denver behind us and heading off into the snowy tundra, it felt as though somehow I'd managed to step back in time. I knew when I arrived at my stop there would still be iBooks and iMessage and eTrade and all that other stuff that makes the world go 'round, but for those delightful couple hours, I was somewhere else entirely. In a glamorous version of my very own life, I was taking a train into the mountains.

It is well known among my contemporaries that I am a lover of old things. I could listen to Dean Martin all day long. I could watch only black and white movies and be satisfied. I prefer handwritten correspondence and real-life books to e-mails and e-books and whatever other e-things are replacing paper nowadays. This is not to say I don't appreciate my iPhone [etc.], because I do. I am as in touch with modern technology as the next person, but there is just something so inextricably romantic about these old things, the classics, the vintage, the antiques, I can't help but hold on to them. This struck me on my train ride; I more or less live knee-deep in romanticism. Where I spent years believing I am not some sappy romantic, avoiding the word wherever possible - it's exactly what I am. Turns out one can't simply avoid it. Sometimes romance finds you right where you are. 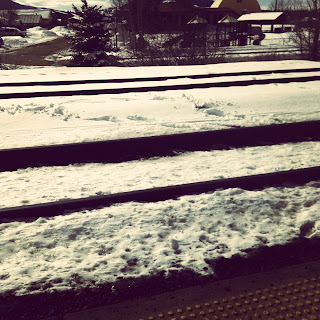 Now, this is not to say I've harbored some aversion to romance all these years; I just didn't understand it properly. Because the thing about romance I think goes unnoticed is it's not just the stuff of those icky Harlequin novels you find in the awkward book aisle at King Soopers. It's not only candlelit dinners and walks on the beach and whatever other stereotypes you'd like to call in, though it certainly can be - I don't mean to pigeon-hole the term to either end. But romance is also a sort of a mysteriousness, a  strange kind of beauty, adventurous and fascinating. It's watching a spectacular fireworks display. It's sitting in the back of a quiet house-turned-cafe, sipping a glass of wine. It's sitting on the top of a car way out on the dirt part of Andover Road, drinking limeade and looking up at an endless, starlit sky. It's going off on a jet ski all alone on a particularly quiet day with nothing but the sound of the wind whipping in your ears, an occasional splash of water in your face.

It's riding on a train through the snow up a mountain. And if there happens to be a cute boy to meet you at the station, I mean, it certainly doesn't hurt. Oh, and if there happens to be an unexpected actual fireworks display that evening? [!] As I waited at the tracks to board the train home the next day, writing the whole thing in my head, I felt thankful. Amused, almost, to be standing at these tracks, writing about romance like it was just another word I could throw around, now.

But like I said. Sometimes it just finds you where you are.
Posted by auntmeggie at Friday, March 15, 2013