ain't nobody got time for that

You all know by now that I like - nay, love - Zumba.  It is the self care-iest thing I do for myself; as good for my soul as it is for my quads. At the end of my favorite class each week, we stretch it out to that Baz Luhrmann song about wearing sunscreen. I remember when that song came out - I was probably fourteen and I thought it was just about the most profound thing I had ever heard. Probably in reality that was only because I thought the class of '99 was hella cool and I wanted to be a part of things, but whatever. When I first heard the song come on in this class, I'll admit to you that my eyes rolled a little bit. It was involuntary. But dang it if that song hasn't stuck itself into my brain and I kind of don't hate it. Maybe it's that by the end of class I'm so exhausted I'm partly delirious, but each week I catch myself listening to the words and as I stretch, letting each part sink in as I need it to on that particular day.

Recently, though, there has been one part that makes me feel a little more in my feelers than the others. 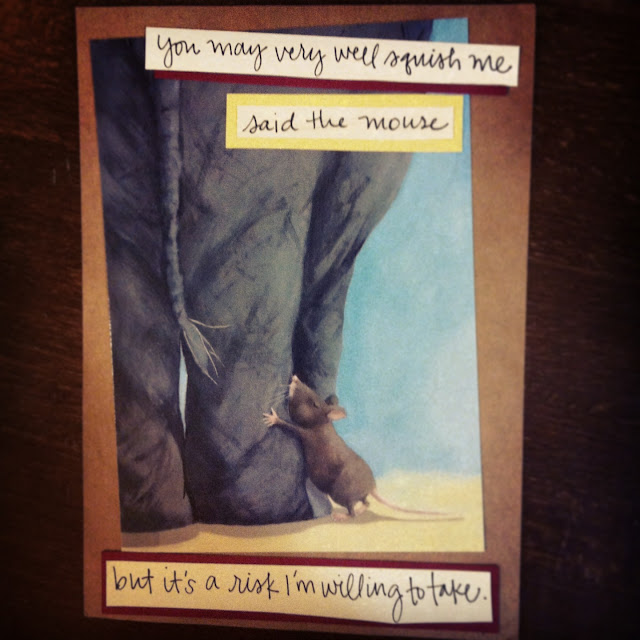 I harp a lot on a lot of things, and one of those things is relationships and how they are risky and hard. I write a lot about how I think it's worth it to take the risk - I think to talk myself into it more than anyone, because engaging with people is, yknow, hard. I made the above card with this very thing in my mind. I remember standing in a store looking at this photo and thinking what a perfect picture of relationship it is. In loving each other, we are all at once at risk of both squishing and being squished. In a good way, for sure, but in a risky one nonetheless. CS Lewis said, "Love anything and your heart will be wrung and possibly broken... to love at all is to be vulnerable." I have to remind myself continually that it's worth it, to make myself keep doing it - because the alternative is quite a lonely reality. I don't think I'd last long there.

Here's the trick about it though - and thank you Baz Luhrmann for reminding me of this - we can't be flippant about this business. We aren't responsible for one another, per say, because that can get a little codependent. But we are absolutely responsible to one another; especially to those who put their tender little hearts in our hands, and ours in theirs. It's a great honor and a big deal to enter into relationship with another person. It happens all the time, every day, every hour even [if you're an extrovert like myself], and as such, I think it can be easy to take for granted it's big-deal-ness.

My point is, we have to be careful with each other. Don't be reckless with other people's hearts. Don't do that. It's a big deal for someone to put their heart on the line and I want to urge you to think about it before you let them. We will have reckless days, days we will be selfish and forget to be careful for a minute. We'll screw it up sometimes and I pray for us the chance to make our amends when we do. But here's maybe the even trickier part, for me anyway - don't put up with people who are reckless with your heart. Don't do it. I struggle with it, honestly, but I promise you from experience it's not worth it. It's not good for you or for them to let it happen, and I urge you to put the kibosh on it when it does. Our hearts are valuable. Worthy of care. So don't even for one hot second put it in the hands of someone who won't.

It's a lesson I needed to learn. I wasn't open to it for a long while because it meant I had to put some kiboshes on, and I'm really not good at that. But thanks to a combination of Zumba exhaustion [thanks, Portie], a tug at my pre-teen heartstrings [thanks, Baz], and a warning I'd heard a thousand times before [thanks, Clive] - I think I see it now. I will not be reckless with other people's hearts; I will acknowledge the risk they take to be close to me. And I will not put up with people who are reckless with mine.

Life is short, sure, but you're far too important to be reckless about it. Let's try our hardest to quit squishing each other. Because to quote Sweet Brown, a poet for the ages - ain't nobody got time for that!
Posted by auntmeggie at Thursday, January 31, 2013

OMG thank you, I so needed to hear this at this moment in my life. Such a bright and beautiful young lady you are.

Good article and have a nice content, really enjoy it. thanks for sharing.