do the next right thing

Children are very concerned with justice, I've noticed. Or maybe not so much justice as they just always want to be absolutely sure that whatever is happening at any given moment is 100% fair. If he got a cupcake, I should too, and it better be exactly the same size and flavor with the precise same amount of frosting on top please. And if she got 6.75 minutes on the swing at recess then SO SHOULD I IT'S ONLY FAIR. Playgrounds are a veritable court of law. At some point though, we stopped talking about it. We stopped claiming things weren't fair or telling people they should do something because it's only fair. But I thought about it recently and I'm not sure we really did stop. I think we stopped saying those exact words; we realized at the very least it made us sound immature and kind of petty, as grownup people, to say those things. So usually we don't. But did we stop worrying things may or may not be unfair? I think we absolutely did not.


The thing about fairness, I think, is that worrying about it isn't terribly productive. On a given day there are any number of facts about my life I can't change. I am 27 years old. I've made countless choices in those 27 years, some good and some not so. I will tell you from experience that I could spend entire days going through all of those poor choices one by one, regretting them and wishing them to be different, but my past remains a fact. While I can move forward, I can't go back and change any of it because whether I like it or not, it happened. I can spend even more days thinking about the things that weren't my choice, hard or life-altering things that happened to me, and I can think about how those things aren't fair. They may very well not be. My point is, I could sit and dwell on how things aren't fair for some serious amounts of time. How there are things I can't change and how much I hate that. But, to recap, it's not a terribly productive strategy. Because after the days of dwelling, everything remains just as it was before I started. The alternative to that - and I thank the good Lord there is one - is to accept those things as true, if unfortunate, and then [this is the important part] decide what to do moving forward.  I think I can accept what is true about my past while refusing to accept it as my future. 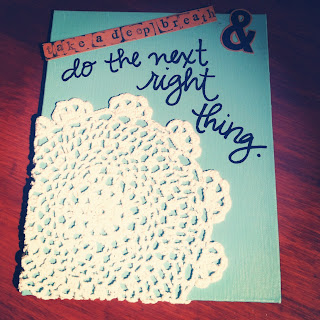 It's really easy to get stuck there - in thinking life sucks and believing the unchangeable truths about our lives are too much to overcome. And you know what? It really does suck. A lot of it really isn't fair. It's easy to feel like we are trapped by our circumstances with no way out, but if only for my own survival's sake, I need to believe that's not true. And when I stop and think about it, I have to wonder if the only circumstance trapping me anywhere isn't the one where I decide I'm trapped and live the rest of my life as if it's true.

When you're faced with a past that is riddled with mistakes and poor choices and missteps, when you're forced to look at the facts of your life and you don't always like what you see, or when you've just screwed up for the hundred millionth time and it seems like you'll be screwing up forever - in those moments, all you can do is the next right thing. Sure, you could sit in your bed or office or car for another 3 hours being mad at yourself, mad at the circumstances, frustrated with your whole life, and maybe you need to for a minute. Get it out of your system. Pitch a little fit. But then you have to get out of bed, accept the facts as they are, take a deep breath, and do the next right thing.

I think on paper this concept can sound really negative and traumatizing, but acceptance is freeing in a way you maybe wouldn't think it'd be. Take it from me - someone who spent a lot of years wishing a lot of facts weren't true. The minute I stopped wishing for something different and asked myself instead what I could do differently, even if it wasn't terribly fair, everything changed. Some days I still feel trapped. Those days are less productive, but sometimes I think I need them just to prove to myself that I don't. And after they are over, I get up and I do the next right thing. The lovely thing about the next right thing is it's always an option. It might look different every time, but even if you've just done 37 wrong things, even then - it's never too late to do the next right thing.

[A moment of honesty - I wrote this yesterday. I believed it with every fiber of my being until I read over it this morning and I found I was less convinced. I'd started spiralling down through a litany of my wrongs, of the wasted years and days and hours wishing that things were different. Even though I am as we speak living the next right thing, I felt inexplicably terrible. Hopeless. Sad and full of regret for the years wasted, and the the unfairness of it all. And then, for what seemed like no reason at all, a little something popped into my head. I remembered a verse I wrote down once from the book of Joel - Even now, declares the Lord, return to me with all your heart. I remember feeling the comfort of those first words, as though the Lord knew my litany and even still, even now [even though these facts of your life are true,] return to me. I read on, just because, and I read and re-read 100 times to let the beauty of this next part really sink in. Further down chapter 2 of Joel, the Lord makes a promise.

I will repay you for the years the locusts have eaten.

Is that not just the very best kind of unfairness?]

Accept the facts, take a deep breath, do the next right thing. It's never - not ever - too late.
Posted by auntmeggie at Friday, October 19, 2012