an invitation to not be a liar

Once upon a time, I was a big fat liar.

When I was a teenager I went through a phase where I lied kind of a lot. My favorite thing to lie about was school. We refer to this time in my life as "the hiatus," wherein I went from pretty highly ranked in my class to literally just never turning in my Algebra 2 homework. When people ask me why this happened, I'm never sure what to say. I think I worked really hard and took school really seriously and one day I looked around and realized that there were people who didn't do that. And they were fine. I wondered what it would be like to not work hard too, soooo I didn't. I was not, however, ready to deal with the consequences of that. I wanted to try not trying, but I didn't want anyone to actually know I was doing it. So, I lied. I lied a lot. I lied very specifically and strategically so as to keep anyone from knowing what I wasn't doing. I delayed the inevitable, deluding myself that I would be able to figure it out by the time any real consequence came along.

Imagine, then, when mid-semester parent-teacher conferences come around and my parents come in to learn that their star student is not doing so hot. Upon hearing how drastically my grades had fallen, I'm told they were immediately worried about my psychiatric wellbeing, that I'd fallen into a deep depression or gotten into drugs or didn't have any friends. Until Mrs. Thiel looked my mom in the face and said, oh no, I think Megan's feeling just fine. She's just not turning in her homework. Ever. Oops. It wasn't a pretty time in my household, that much I can tell you for certain. 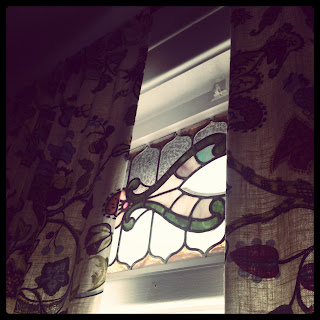 There were other things, too, things I didn't want to face, so I lied. The situations were different but every time I lied it was because I was afraid. I was afraid of being a big screw up who didn't do things right enough or well enough, and I couldn't handle the thought of that, so I made up something I thought was acceptable to myself and everyone else. I thought it would be enough, the pretty life I crafted for everyone to look at, but all it really did was make me a whole new kind of afraid. I was afraid of the consequences of an action, so I lied to delay them. But what I didn't realize was that my fear of getting caught for the lies delaying my consequences was FAR greater than my fear of the actual consequences themselves. It was miserable. I lived my days as a liar constantly in fear that my jig was about to be up, that I was about to be caught. I was constantly calculating and reconfiguring for when the curtain was drawn and I would have to come clean. It was an anxiety I couldn't handle. I'm just not cut out for secrets.

I screw up a lot. I don't do a lot of things right. But I don't lie anymore. Sometimes I decide I don't feel like working hard and I have to face the music. Sometimes people aren't ready for the mess, and they won't stick around, and that part sucks a lot. But any day of the week I will choose being seen for the messy, broken screw up I am over living with the constant fear of being caught in the lie of trying to make things look pretty. Because I meet people all the time whose lives, to look at them, are carefully crafted and artfully worded and beautifully sculpted into something that is pretty to look at. I even feel envious, sometimes, because I am a lot of interesting colors maybe, but I'm a mess. But then I remember that those pretty store-front window li[v]es are flowery, but flimsy. It only goes so far. Once I go even one step inside I see you've got a bunch of junk much like mine. Having been a liar myself, I wonder how long you've worried about being caught. I wonder how long you secretly hoped and prayed you would be. That someone would uncover your big fat lie so you could stop living in fear of it happening.

I understand the appeal of lying, of pretending, of putting on a show to cover up what's really going on if what's really going on isn't pretty all the time, but it nearly swallowed me whole, way back when. Maybe it'll delay your consequences for a while, but the part where you wait to get caught isn't worth it. Or, heaven forbid, you never get caught and live the remainder of your days alone in a tangled lace of secrets and lies. Here's something else I know about lying: it doesn't make the right kinds of people like you more. It's off-putting and unattractive and as well as you think you're hiding it, you're probably not doing quite as well as you think. I'm not shaming you - which is I know what you think will happen if you stop lying -  I'm inviting you. Inviting you to join the rest of us losers and screw ups and enjoy your life. Relax. It won't be easy, I'll never pretend that's true. But it'll be better. Because you'll never for one more day live in the fear that you're about to be caught. You'll be you, broken like the rest of us and facing music on the reg, but you'll be at peace more days than not, and that's something.

Don't be a liar. Tell the truth and face the music and quit living in fear. It'll be really terrible at first and you'll curse the day you ever read this blog, but then you'll survive it and relax and realize I'm right. I'm a recovering liar and you could be too. Join us in the mess. You'll fit right in.
Posted by auntmeggie at Sunday, October 07, 2012

Aww...Megs. You are a breath of fresh air everytime I read your posts. I know all to well the life of a liar and have worn many masks to be the person I thought people wanted and hide the "messy" me. Thanks for reminding me that I like the "messy" me and so do all my true friends...like you. Miss you lots!