everybody needs an audience

Here's something about me: I'm kind of a talker. As evidenced simply by the fact that I do this right here, where the basic premise is I write things and expect you to read them, you probably shouldn't be surprised. I was the kid who came home from school every single day -basically from elementary school on - and recounted moment by moment the ENTIRE day for my mother. I'm speaking literally. I remember when I went to college how surprising it was to realize no one cared to hear me recount every event in my day. I thought my roommate would, but she spent most of her energy yelling at me for waking her up, day and night. I swear all that girl did was sleep. And yell at me about it. But whatever, point is, she didn't much care what I was doing. Since that time I've had a few roommates who enjoyed a good debrief after a long day [Alli pie, I'm looking at you] and I've appreciated them ever so much. Because, to recap, I like to talk. And in order for a talker to get the full satisfaction of talking, someone has to be listening.

What I'm telling you, essentially, is this: I require an audience. For survival. I feel sure it's on the hierarchy of needs somewhere.

I'm a lucky little chatter in that throughout my lifetime, I've always had an audience. Even if they were only pretending, someone has always listened to me talk. About My Little Ponies and playgrounds, braces and boys and bff drama and even now about boring grown up stuff like saving for retirement and crock pots. So, yknow, I keep talking. I've always been this way, and probably more so than most; but I think I'm not entirely alone in it. Not everyone would openly admit they want a constant, captive audience [it's fine, I'm secure enough to stand alone in it] - but everyone needs one sometimes.

I can't imagine a world where no one cared about listening to me, is my point, but all the time I meet people whose worlds look like that. People who didn't have a mom who listened to them talk about their day, not a friend or a roommate who cared to hear about how they were doing. I don't know if it's because it's such an important thing to me that I am so sensitive to this, but it breaks my heart pretty much on the daily. Yes, sure, maybe there are worse things. But take away the theatrics and hyperbole [which, sorry, I can't help but bring to the table] - and process for a moment the reality that there are people in this world who consistently feel invisible. Like they are unworthy of an audience. Like their story is completely and totally un-captivating. Few things make me sadder than that. 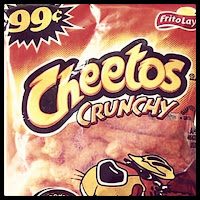 Once I had a kid referred to me for therapy and the first time I tried to meet with her she refused to talk. I mean she flat out would not sit in a room with me and say words. She was tough - cool and unemotional and a little mean, honestly, which she clearly wanted to make sure I knew right off the bat. I remember feeling defeated as she turned back into her classroom. But then she turned to me, eyes ready to roll, and told me that maybe if next time I brought her "Cheetos or something," she would consider talking to me. Now, I had met with lots of kids who were more interested in getting out of class and the possibility of counselor candy than actually wanting real help, so I knew it was a long shot that this would actually be productive. But something in the way she asked, a glimmer of timidity shining through her nastiness, made me wonder. So the next week, same time, I showed up at her classroom. She followed me back into my office, arms crossed, loaded for bear, and I handed her a bag of Cheetos. She took them, and she sunk slowly into a chair. She opened the bag and she didn't look at me for a long time but she said I'd gotten the good kind. I wish I could do justice in words to the way she transformed right in front of me, with that stupid bag of Cheetos in her hands, but all I can tell you for certain is that girl needed an audience. She was aching to tell her story. She just needed Cheetos to do it.

I think the Cheetos were a test. To see if I'd listen. To see if I thought she was worth the trouble. To see if I'd show up again. To see if I could handle her, if I was really in, before she shared. I think they also served as a buffer for her. It would have gone against everything in her carefully crafted adolescent persona to just accept counseling. Cheetos made it ok for her. Cheetos were a safety net, something to look at instead of me while she unfolded her life for someone she barely knew. I have no idea where or how that girl is today, if it made even a lick of a difference in the longrun, but I know that for the low price of a bag of Cheetos, I got to hear a story I'm not sure had been told before. People need space. And the thing is, whether you're a therapist or not, we all have the opportunity every single day to make that space for someone. They won't need it every day. They may not take you up on it when it's offered. I think that girl desperately wanted an invitation and completely lacked the awareness of how to accept it when it was offered, which was where the Cheetos came in. And she made me wonder how many people I dismiss as demanding or mean who are just that same way; hoping for the space but clueless about what to do in it. I don't know that everyone you meet will be as easy as Cheetos, but I just think the availability of space, the knowledge that if we need it, it's there, is a necessity. It's how we are. Create it in your life and watch people thrive in it. Maybe you already do, and maybe you're great at it. But if you talk a lot, like me, just make sure you're paying attention to the times when you need to shut your mouth and be the audience. You might be the only one they get that day, so you'd better be a good one. A captive one.


And on the days when you're tired, when the last thing you want to do is be the audience, remember you're not just listening. Without saying anything at all, not one single solitary word, you're communicating to another person that you see them. That they're worthy of your time and maybe even a bag of Cheetos. They will hear from you, maybe for the first time ever, that their story is captivating.

You are the greatest ������ this post makes me teary- it sure can be difficult to be the audience, but what a difference it can make. Thanks for reminding me.