an inescapable reality of my very existence

Summer is a unique time of year in that it pretty much always seems transient. And even now, when I don't get even a semblance of a summer break, the summer brings out in me an attitude of transience, of general whatever-ness. I stay out too late and feel footloose and fancy free because, yknow, it's summer. In the winter I would never do these things, heavens no, but in the summer anything is fair game. I can sit on porches and rooftops til all hours, or go to an Iron Maiden concert and a midnight Grease singalong in the same week, should I see fit. No matter that in terms of the logistics of my life, nothing is different in the summer that should merit such shenanigans. That's neither here nor there. Not where summer is concerned.

This summer has felt excessively transitional though, which we all know makes me uncomfortable, and I haven't been able to quite put my finger on it. I moved at the beginning of it - oh and then I moved again at the end of it, so that's pretty major I suppose. But even beyond that, things have felt more changey than I like. Then the other day someone started talking about being in a season of pruning. [They used words like good, if I remember correctly. Healthy, or something stupid like that.] Anyway, there's actually no getting around that this is what's happening. Hearing it only defined what I already knew. Only here's the thing about that - I don't remember ever signing off on it. I don't actually have any real interest in being pruned at this point in my life, in fact, and as such, I would very much like to call off the shears and promptly put an end to this nonsense. I just moved into my fourth house in a year. Now's not really a good time for me.


It's not that I can't see the long-term benefit of a season of pruning, because I can. I know stuff. I read what John said about pruning and I get that no real change is going to happen without it. I can even recognize that the parts being cut aren't bearing any fruit, but that doesn't make the cut not sting. It doesn't make it less scary to be naked and branchless while I wait for new stuff to grow all up on me. Knowing it's for the best doesn't make it ache less when it seems like every time I turn around I'm watching pieces of me fall to the ground. I'm an attacher. I get attached to people and places and seasons and when they are pruned from me, for better or worse, and whether it's rational or not, it feels sort of devastating for a while. I know change is a process, I know grief and hard things are a part of it and I know it's good and healthy, if stupid. Doesn't mean I want it to happen to me. I know the parts being pruned from me are dead and ugly and fruitless. Doesn't mean I won't miss them when they go. They're my dead and ugly and fruitless parts, thankyouverymuch, and aren't they better than nothing at all? 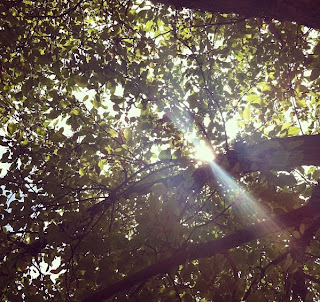 I think the tricky thing about pruning is that the timing is always right and never good. So I went back, fairly cranky about the whole deal, to consult John about this. I wanted to see if I could figure out a course of action for myself. Maybe I even hoped I could find some kind of a loophole out of it. But instead I discovered that in the midst of my pity party, I managed to forget some pretty basic botany. You see, I am not some kind of magical, free-floating branch. I am part of the vine. Though I am sometimes nakeder than I'd like, I am never disconnected. I read: apart from me you can do nothing. I feel shame for just long enough to recognize it, which is when I feel hope sidle in gracefully, knowingly, to take it's place.

I am not free-floating. I attach because I was first attached. I love because I was first loved. And I will continue to love, to attach, to bear fruit in those loves and attachments, in new ones and maybe even old ones that can yet be salvaged, if I can manage to remember one thing. Jesus says, as the Father has loved me, so I have loved you. Now [finally, instructions!] remain in my love.

It doesn't say I lost it and I better go scurry to get it back. It doesn't say shame on you, which is what I default to when I screw up. It doesn't say I better figure my mess out, or pull myself up by my bootstraps. I half expect it to tell me that I'd better get to work in the aftermath of my epic fail to try and grow something worthy of the vine. But no. All Jesus says is remain in my love. Remain. Which is literally defined as continuing to exist.

What this communicates to me is that even when I do it all wrong, God's love for me remains. It will continue to sustain me through cuts and aches and devastation, because it's just a thing that is. An inescapable reality of my very existence. And in the midst of what seems to be perpetual transition, there's nothing at all transitional about that.
Posted by auntmeggie at Thursday, September 06, 2012