I feel like Tuesdays are usually not great days. I don't know what it is, but mine tend to have people in them who like to yell. At me, mostly. Or extended trips to unpleasant places for work, like the county jail or the social security office. But it's not just Tuesdays. Sometimes it's Mondays. Or Fridays even, heaven forbid, that are unpleasant or yucky in some way. I don't love it when that happens. Call me crazy, but I am the kind of person who likes to have good days. The kinds where people don't yell at me and stuff. 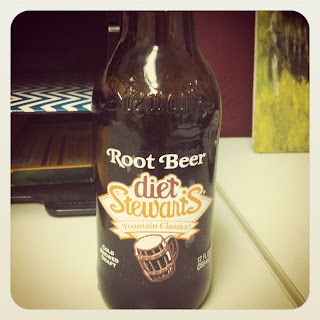 There are a couple of things - tricks of the trade, if you will, if the trade is having bad days I guess - that can help on these days. I like to call these things game-changers. Often when I am having a bad day and something delightful happens, I will exclaim the word triumphantly [likely out loud and probably in public because talking to myself is apparently a thing I do now] as if to solidify that the game has, in fact, been changed. I'd say most of the time these things are out of my control, unexpected, like a surprise. But there are a few things that, if I am having a crap day, I know are within my power to call into the game.

Those things are, to list a few:
A diet root beer. Preferably in a bottle. Works every time.
Any kind of appointment involving my hair/nails.
Zumba, which for me falls on Tuesday, which is lucky because Tuesday is the pits.

The best kind of game-changer, though, is the kind you're not expecting. The kind where the day just kind of sucks and then something great happens out of the blue and, yknow, changes the game and stuff.

POR EJEMPLO:
Realizing I parked in a 2 hour parking spot 4 hours after I parked there and not getting a ticket about it.
A really good parking spot at work. Parking in general tends to ruin my life, if you couldn't tell.
Getting to the left turn at Colfax & Colorado right when the arrow turns green.
Someone Instagramming a picture of me where I look really great.
Getting something really good in the mail, like a book I forgot I ordered on Amazon, a $5 bill from Gram, or a photograph of a young Art Bamford.
Good news, in general, tends to fall into this category.
Finding out my client's attorney is as attractive in person as he sounds on the phone.

Any kind of compliment where the gist is that I look really great.


One particular scenario stands out in my mind as the mother of all game-changers, and that is the tale of the time the firemen came to my rescue. Now gather round, and I will tell you of this magical day:

One morning not long ago, I was in a hurry. I got to work a few minutes later than I should have, I was rushed and hustling to get inside to deal with my day. The parking lot at my old office [we moved last week], you should know, was a complete disaster - and on this particular day I parked on the outskirts. Which means my car was blocking about 6 other cars in. Which means I would probably have to move my car in roughly 8.5 minutes when someone needed out. Business as usual, really. My hands were full of junk, so I locked my car from the inside, shut the door, and turned to walk into the building, only to be filled immediately with a sense of dreadful dread: I had locked my keys in my car.

I had to be in a meeting in 18 minutes. I was blocking enough people in that the chances were pretty good I'd need to move my car in the very near future in order to let someone out to do their job. I didn't even have the option to get my spare key from my house because my house key was, yknow, locked in my car. I ran inside and started frantically asking a bunch of problem-solving case managers what I should do. It was suggested to me that I walk over to the fire station, "bat my eyes a little" and see if they wouldn't help me. Having been waiting the entire year of my employment for an excuse to go to the fire station, which just so happened to be across the street, my stomach did a little somersault and I decided it was now or never. Out of time and options, I would have to go to the firemen for help.

So, I did. A nice looking gentleman standing outside told me to go wait by my car and they would be right over. And sure enough, moments later, over the horizon, like a beacon in the night - came not one, not two, not three, but FOUR firemen. Wielding all the necessary implements to avert my crisis. Four strapping young men coming to my rescue. Not usually one to play the damsel in distress card, in that moment as they approached, I decided to forget all about what I usually do, and I played it like. a. boss.

And as they approached - and my female coworkers, as though sensing the firemen's proximity to them, gathered to watch from the window - the panic and dismay I had been feeling was seamlessly replaced by peace and joy, and I exclaimed softly, triumphantly: game-changer!

No I didn't. I was way too busy swooning and batting my lashes and wishing I'd worn something cuter that day to say any actual words, thank goodness. But it would be a way better way to end this story if I had, right? Maybe next time. I do so wholeheartedly pray there is a next time.
Posted by auntmeggie at Thursday, July 19, 2012