My clients are known for having some interesting requests. And a couple days ago, I kid you not, I got a voicemail that said this: Hey Megan, I found this baby bird that must've fallen out of its nest - do you think you could look online for me at places we could take it? Thanks! See you tomorrow! Now, the thing of it is, I have approximately ten trillion things to do with this guy. We need to go to the Social Security office. We need to find him a place to live. We need to go to lots of meetings and appointments AND he lost his bus pass so I will have to cart him around myself until he gets a new one. That's a lot of stuff. So ask me if I really care to spend time looking online for bird sanctuaries. The answer is no. No I do not.

So sure enough, at our scheduled meeting time, in walks my client carrying a giant cardboard box.

Hey guy, I say. You've got a bird in that box, don't you? Affirmative.

Now, I don't really like birds. I like putting birds on things, but I don't so much want anything to do with an actual bird.  So mostly to appease him - because he is undeniably sweet and clearly very concerned with the health and safety of this little pipsqueak - I went up to my office and googled "found a baby bird Denver." Much to my surprise, through a series of weird phone calls (hard to hear, what with all the birds in the background), I found myself jotting down directions to the Wild Bird Rehabilitation Center of Denver. That's a thing. And because my sweet client wasn't going to let go of that damn bird until I took him there, there is where we went. To Wild Bird Rehab. Which, to recap, is a real thing that exists.

As I drove, the little nugget sat in my client's palm, squawking and being generally bird-like, and I have to admit to you that I was feeling a little annoyed. This was adding more than an hour to an already long and generally unpleasant expedition to Social Security. All for a stupid little bird. 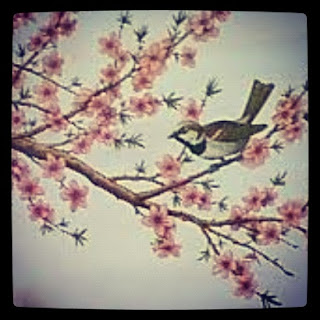 We arrived at the bird place and the bird people, rushing it to an incubator, applauded my client for keeping the little dude alive for those few days. He'd saved the little bird's life. It was a little adorable, how pleased he was, how relieved that the bird would get the care it needed, how he explained so earnestly that if you just make this little noise he'll open his mouth to eat - and since I'm not some kind of heartless fiend, I did begin to soften a little to the whole situation. Even Wild Bird Rehab. My client asked as we walked out - something of an afterthought - what kind of a bird was it that he'd saved? A sparrow, she said.

Sometimes the world is rough. Sometimes people look at us, at me probably, and say all of this trouble for stupid little you. When we've got so much more important things to worry about. But when I heard that woman's voice say that it was a sparrow he'd saved, my breath caught a little because an old hymn rang through me, clear as the squawk of that little bird in my client's palm:


Even on that stupid little bird. You don't have to sing because you're happy, I don't know if you are. But at the very least (which if you ask me is maybe the very most) you can sing because you're free. I know you are that.
Posted by auntmeggie at Friday, May 25, 2012

I wish I was funny and smart like you.