the haps and the goings on

So, I've been relatively inconsistent in the writing realm. That's on me. This is for multiple reasons, but mostly, I'm just very busy and important these days. It takes up a lot of my time. You understand. 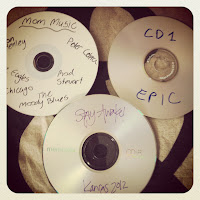 Today, in a matter of moments, in fact, I am driving to Wichita for what I have affectionately dubbed my annual introversion binge. You see, I am an extrovert of the highest order. In ways that are not always adaptive, I am a people person. As such, being alone, spending time by myself? So not my jam. But once a year, about this time, I get the itch to spend a glorious 7-8 hours all by my lonesome in my little red Saturn. And during those 7-8 hours - completely uncharacteristic to my people personhood - I don't want anything to do with any person other than the cast of Rogers and Hammerstein's 1963 version of the musical Cinderella starring Lesley Ann Warren, which I will sing in it's entirety, probably more than once. Annual Introversion Binge, we meet again. Here goes nothing. And you don't need to worry about me. I have mix cd's, so it's fine.

Another reason I will be relatively preoccupied in coming weeks is because I am moving. Yes, tis true, the puggle will be my roomie no longer as Kels is moving to San Fran for love and bliss and all that. I'm not mad about it, there's not really any room for that, but I am a little frantic in terms of what to do now. I have some options, which is nice, but the future is yet uncertain. Oh, there's nothing quite like this seemingly unending stage of transitional twenties. Oh well. Que sera, sera, and all that.

Here is something nice that has come of the past few days, however. In putting the word out about my move to anyone who will listen [I'd say strangers excluded but I don't like to lie], I have been met with many suggestions of what I should do. I have been offered basements [the good kind], other basements [the unfinished, dead-bodies probably buried there kind], the back-end of a Forerunner, couches, more basements, summer sublets, old people's basements, rooms in South Carolina, pallets on the floors of friend's bedrooms, squatting in empty neighbors' houses, et cetera and so on and so forth. What struck me though, with all offers both serious and not-so, is the number of people who cared and responded. To crazy me. Empathy [I'm choosing to not call it pity] dripping from their voices, telling me these words:
At the very least we have an option. We'll figure it out, ok?

Moving sucks. Scouring Craigslist on the daily for a house that isn't terrible super sucks. Life, sometimes, is sucky. Sometimes it's just nice to know that in the face of all the suck, I will be met with countless people who will tell me it's ok. I'm not alone. And that's something, yknow? 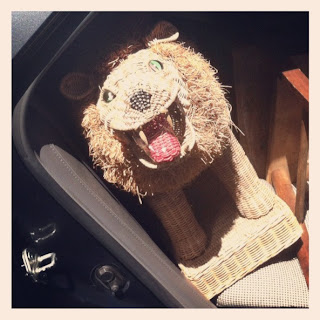 OH, I almost forgot! In addition to walking for Victory in the Valley, and watching my sweet little niecey pie Emily graduate from high school this weekend (!!!!), I am also travelling to Kansas by car in order that I might procure this little guy: a wicker lion which has been lovingly bequeathed to me by my sweet little Nana pie. So wherever I end up in the next month, I know one thing for absolute certain: I will have a wicker lion with marble eyes in tow. And that is also something.
Posted by auntmeggie at Friday, May 18, 2012