Jesus loves me, this I know

Yesterday I had a horrible day.

I won't get into it because it's so not worth it, but it was bad. I was crying before I even got to work, and everything from then on just made me do more of that. It was like for one day I just had zero stress tolerance. The stuff that happened wasn't that bad, but I felt completely and uncharacteristically ill-equipped to handle it. So I didn't, not well anyway. I cried a lot and spent more than average amounts of time on the phone with my mom. It wasn't pretty. Also it was snowing. In April. Which we all know I don't love.

I was so ready for the day to be over, but I had long-standing plans to spend time with my sweet friend Morgan, as she has recently returned from being cool and living in France for a bit of time. But as the day dragged on, I was feeling less and less like spending time with anyone, and started thinking I might cancel. I sent a few non-committal texts and we decided we'd grab dinner right after I got off work and then I could go home and go to bed dramatically early. Like salt in a wound, on my way to fetch her from her place of residence, I got stuck in a million hours of women's basketball championship traffic. I continued to feel woe-is-me about the state of my life. But then, while sitting at yet another traffic stop perusing the endless abyss that is Twitter, something caught my eye.

One of my all-time favorite old movies, The Unsinkable Molly Brown, was being screened tonight, for one night only, at this artsy little theater not far from my friend. I looked at the clock - the timing was perfect. After a moment of I'll never get anyone to go with me sadness, I realized something great: if I was going to convince anyone to go sit through 2+ hours of Debbie Reynolds at the last minute on a Tuesday night, it's absolutely going to be Morgan. How fortunate that I have such good taste in friends. And how fortunate that her response when I presented the option to her was, without a moment's hesitation, "well, should I make us some popcorn?" Didn't I say I have good taste in friends? 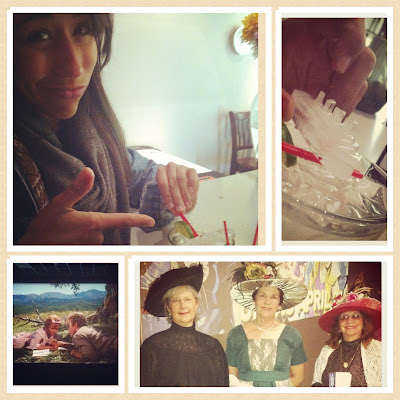 Now, I don't want to sound sacrilegious, but Jesus loves me, this I know: this was no ordinary night at the movies. The event was put on by the Molly Brown Society, and it was a whole to-do. There were women everywhere in period costumes, a band playing music that sounded straight from Christmas Morgan's saloon (banjos and bagpipes, be still my heart). They even had complimentary "gin and titonics" for us after the movie, in which there were ice cubes in the shape of the Titanic, I'm not even kidding. [Not to mention, compounding good with goodness, this whole movie deal is a series. And next week, the very day before my birthday, they are screening the only movie that I could possibly be more excited to see on the big screen than Molly Brown - Thoroughly Modern Millie. It's a birthdayweek miracle.]

For those of you who don't know me well, all of this is right up my alley. I was giddy. I can't imagine a more tailor-made event to turn around my terrible, hopeless day than this one. Like, a normal night at the movies would have been great - this, though, felt like a party planned just for me. That might sound really stupid to you, but I felt full and loved. Not in a generic, ordinary way. In a hugely personal, intimate kind of way.

The kind of way I believe we're supposed to experience Jesus.

So no, while I don't think Jesus commissioned a bunch of ladies to dress up in big hats and that cute bartender with the 50's haircut to make us free drinks just to turn my bad day around, I do believe it's a picture of how Jesus loves us. Personally. Intimately. At the end of a long day when hope feels lost, joy is restored in a way that nothing and no one else could even come close to doing. I think it's apt that this came during holy week, too. Because as I've thought about it more, I wonder how much more beautiful to experience the death and resurrection of Christ through the lens of a love so profoundly and personally intimate. Christ's sacrifice was for everyone, but it's not selfish or silly to feel like it was for you, specifically, because it was. All at the same time, each and every one of us is loved by God in a way that feels like walking unexpectedly into a party thrown just for us.

That's just about the best thing I've ever known.
Posted by auntmeggie at Wednesday, April 04, 2012

1. I wish I went to that.
2. I wish I could name drinks cool things like "gin and titonics." Why doesn't my brain work that way?
3. I wish I always thought of a good day turnaround as Jesus loving me. Having trouble with that one these days.