Remember how I was excited about Lent?
That was before I went to the Ash Wednesday service at my church.

I still wasn't sure what I was going to do, for Lent, and I went in prepared to keep myself from shame-spiraling due to the immensity of the "list of things I could/should Lent because I should probably be doing them anyway." But instead of feeling shame like I'd so hoped and expected, I felt conviction instead. And that's no fun, because while I can be a good little therapist and talk myself out of a shame-spiral, I have to pay attention to conviction because it/s usually pretty accurate. And it almost always means a fair amount of work on my part. Don't love it.

The scripture read in service was Psalm 103, and so it goes: Bless the Lord, O my soul, and forget not all his benefits - and then they're listed, which is great: who forgives all your sins, heals all your diseases, who redeems your life from the pit and crowns you with love and compassion, who satisfies your desires with good things, and so on. My pastor focused on the beginning part - the forget not piece. He asked us, as we prepared for the season of repentance, if there was anything we had forgotten. Any of God's benefits. Almost immediately I felt the conviction. The list, I think, is my pit. And I'd tried to get out - to white knuckle it, hunker down, pray for superhuman willpower to just do better. But when I failed, I think I just sort of settled in. The pit is terrible, but it's safe. I was so busy trying to work all of it out on my own, though, I'd forgotten that God is rescuer. A redeemer of the pit. I looked all over the place for rescue, but forgot to look where I say I believe it is.

I am aware that it would be highly unrealistic to try and tackle every item on my pit list over the next 40 days. Instead, I asked God to make clear to me where I should start, where I was looking for rescue that I could let go of until Easter Sunday comes. It was pretty easy choice, really, one that maybe I'll tell you about sometime when I understand it better myself. So I'll start with that. And as for the rest, it is my hope, my prayer, and also my fear that God would begin what I think really needs to be an overhaul of my life. And I don't mean to sound dramatic; it's mostly things you maybe wouldn't even notice if I stopped or started doing them. All I know is that I need to make space in my currently cluttered life for a relationship with Jesus. And it may be really ugly, I bet it will hurt a lot more than I'd like, and I feel sure it will take longer than I think it should. But I know the overhaul is necessary. I need rescue, and I absolutely know I can't do it on my own.

The amazing thing - the reason I believe this is the real deal - is that even though I'm looking at giant life alterations, I don't feel any shame. I don't feel like I'm the worst person in the world. And I'll be really honest, I'm terrified to ask for the overhaul, because what if it doesn't work, what then? What if nothing changes at all and this stupid pit is just my lifelong reality? What if I lose interest and go back to pit-living? I guess it's a possibility, maybe. But then I read through Psalm 103 and I think probably it's safe to ask for an out. I forget that God is faithful, even when I'm not so much. And it says right up there that the Lord is a forgiver of sins, a healer of diseases, a redeemer of pits, a crowner of love and compassion, a satisfier of desires. God wants to do that for us, for me. I think he delights even in our asking. 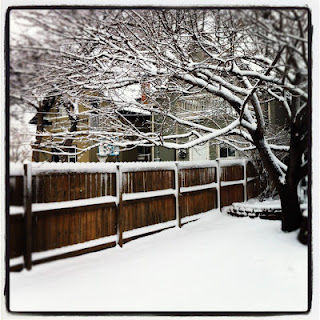 Lent is a season of penitence, but at the end of it all, Lent is about grace. At the end of the service that would instigate the great life overhaul of 2012, we sang a song that has a line in it that stands out to me: sin had left a crimson stain, he washed it white as snow. We were forecasted to have a light dusting of snow the following day. Instead, while I slept, snow covered every surface of my world. I woke up Thursday morning to about 4 inches of pristine, white, snow-covered ground. And even though I wasn't dressed appropriately and I hate scraping car windows more than anything, what a lovely picture of the possibilities.

Grace is so much more powerful than sin.

Forget not all his benefits: I believe God wants to forgive us, heal us, redeem us, crown and satisfy us. Even a pit lover like me.
Posted by auntmeggie at Saturday, March 03, 2012

"Grace is so much more powerful than sin." I wish I had you whispering that in my ear always.

I love that focus on not forgetting... what an inspiring/convicting idea.