kids at a party

Is there anything more fun than watching kids at a party?
It's always the same - some sort of cross-cultural phenomenon I bet. I don't know what it is about the brain chemistry of children under the age of 9, but they all act the same way at parties where there are grown ups. For the entirety of the gathering, from the moment coats are dropped on the floor til the moment mom yells that it's time to go, it's a constant loop of running, chasing, through the house, outside, inside again, between legs, spilling drinks, red-faced, sweating, and giggling with a notable degree of panic because AHH SHE'S ALMOST CAUGHT UP TO ME LEGS RUN FASTER! For those few rambunctious hours, age doesn't matter and rules go out the window and somebody might get kicked in the face, but they'll bounce back quick, just watch. Always and everywhere, I have found, it is the same. Kids en masse just instinctively know how to party. 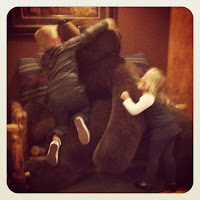 I get sad sometimes because I watch kids grow up with video games and portable electronic everything. I get it, though, because I've nannied my fair share of wretches and I clearly remember the feeling of relief that would flood over me when Dora came on and I got to sit down for 22 minutes or so. But at times like this, at parties watching kids I'm not in charge of running every which way, playing with each other and falling down and skinning knees and laughing so hard they can't breathe, that I sigh a little sigh of relief.


Because kids still know how to be kids. All is not lost.
Posted by auntmeggie at Wednesday, March 21, 2012