I'm not strong enough to be a dragon

In grad school I had to write a paper about my personal theology of change. Basically, if I believed change was possible and how I thought it happened in a person's life. I don't really remember what I wrote, something about Jesus and cognitive behavioral therapy I'm sure, but I'd like to change my answer. If I could write it again I'd just quote CS Lewis and be done with it.

If you haven't seen or read The Chronicles of Narnia: Voyage of the Dawn Treader, I recommend it, even if only for this one part because it's so perfectly perfect. In it, there's a character named Eustace who is awful. He's obnoxious and rude and a hater and no one likes him. In the course of the story, due to an act of pure selfishness, Eustace is turned into a dragon. When he is finally a boy again, he explains the experience of turning back. First he says Aslan [a lion symbolizing Christ in the Narnia stories] leads him to a well and asks him to undress. Eustace recounts how he scratched and peeled the dragon skin off, three different times, each time only to find more scales had grown right back. So then? I'll let you read it. Then go read the whole thing because CS Lewis is truly geniusly brilliant. 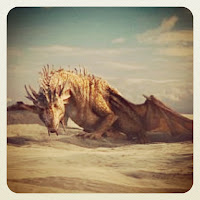 Then the lion said  – ‘You will have to let me undress you.’ I was afraid of his claws, I can tell you, but I was pretty nearly desperate now. So I just lay flat down on my back to let him do it. The very first tear he made was so deep that I thought it had gone right into my heart. And when he began pulling the skin off, it hurt worse than anything I've ever felt. The only thing that made me able to bear it was just the pleasure of feeling the stuff peel off. You know - if you've ever picked the scab off a sore place. It hurts like billy-oh but it is such fun to see it coming away. Well, he peeled the beastly stuff right off - just as I thought I'd done it myself the other three times, only they hadn't hurt - and there it was lying on the grass: only ever so much thicker, and darker, and more knobbly-looking than the others had been. And there was I as smooth and soft as a peeled switch and smaller than I had been. Then he caught hold of me - I didn't like that much for I was very tender underneath now that I'd no skin on - and threw me into the water. It smarted like anything but only for a moment. After that it became perfectly delicious and as soon as I started swimming and splashing I found that all the pain had gone. And then I saw why. I'd turned into a boy again.

I have some thoughts.

1. I was afraid of his claws, I can tell you, but I was pretty nearly desperate now.
Eustace tried so many times to fix himself on his own and couldn't do it. He was desperate and powerless, but afraid to ask for help. There's always going to be fear, I think. You just have to get to a point where the fear of staying the same becomes greater than the fear of changing.

2. The very first tear he made was so deep that I thought it had gone right to my heart. And when he began pulling the skin off, it hurt worse than anything I've ever felt.
The weird thing about doing the right thing is it almost never feels right. You would think, I don't know, if you're making big, mature steps toward a better life it would feel good right away. But it doesn't. Right things are often hard things and don't feel right at all. But it doesn't mean they're wrong - it just means we've gotten attached to the not-right things, we get used to them, and the first few tears are going to feel truly, unbearably awful.

3. It hurts like billy-oh but it is such fun to see it coming away.
Eventually, when you can start to see some of the progress, it starts to feel worth it. Results aren't immediate, and they aren't necessarily pleasant. But as days pass and the pain of it becomes less sharp, it really is sort of fun to see the dark, thick, knobbly stuff coming away.

4. Then he caught hold of me [that part just makes my little heart sing] - I didn't like that much for I was very tender underneath now that I'd no skin on - and threw me into the water.
After all the tearing and the ripping and the heart-wrenching, we're made clean and new. We feel the pain leave us and even though it smarts for a moment it is - and I love this - perfectly delicious.

Change isn't fun, but it's possible. And I think CS Lewis has captured here in the most perfectly simple terms a working theology of change. We can't do it on our own because we lack the power (maybe even the willingness) to cut deep enough. And when we give ourselves over to our Aslan, the searing pain that is necessary to get to the good part is so unbearable that we often walk out right in the middle, maybe even more than once. We think we can't do it, can't take it, won't be able to survive it. But if we're desperate enough - if, as I said, our fear of staying a dragon outweighs our fear of changing out of one - relief comes. The pain will leave us and we will be made back into who we are. The fun thing is, Eustace didn't just become a boy again. He was different. Oddly, mysteriously, he was better for the experience.

The trick, I think, is that we tend to believe we're not strong enough to endure it. When it hurts so much I can't see straight, I think I can't endure the loss of relationships, changes in my lifestyle, the disappearance of the coping skills I've clung to for so long. But I think that's wrong. Change will be hard, but it won't break me. What will break me is to remain much longer in a skin that's not meant for me. We think we're not strong enough to do what it takes to turn back, that we'll be safer as a dragon. But we've got it backwards.

Be still my heart...I love this entry