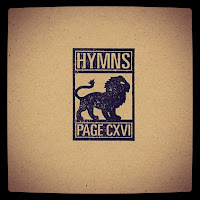 I may have mentioned that I love music. It's also worth noting that I doublelove a good cover - when someone sings a version of someone else's song. You may find this shocking, I realize, what with my love of karaoke [by definition, covers as far as the eye can see] and my not-so-secret desire to someday be a part of a cover band that sings primarily Heart songs, but I digress. I just think it's sort of fun, a little refreshing, to hear a different interpretation of a song you already know well. This maybe isn't really the same thing, but for some reason I recently [re]discovered a little project called Page CXVI, which is what a local Denver band, The Autumn Film, is called when they do covers of old hymns. [Can you call a hymn a cover? I'm asking.] Regardless of what it's correct to call it, I can't get enough. It is like rest for weary ears.

I think I've needed to feel a little worshippier than usual. As such, I've been listening to the hymns nonstop, and it has been so, so good. I've always loved hymns - I think they are timelessly beautiful, and lyrically speaking they are completely poetic, which given my moderate obsession with the written word shouldn't be all that surprising to anyone. And above all, I think I take great comfort in them because there's something powerful in this, for me: whether they were written 10 years ago or 100, they are as true now as they were then. Amen & Amen.

The overhaul, as it were, has been hard so far. I'm making healthier choices and putting up better boundaries and not doing things that yes, aren't great, but I've gotten really used to doing them so not doing them is hard. As a result of these difficult tasks, I have found myself getting a liiiiittle more anxious than I am used to or comfortable with. I don't like anxiety, and when I get crazybrain I tend to run with it, a little; so before I know it I'm ten miles down a rabbithole that I shouldn't have even looked down in the first place, let alone sprinted into like my life depended on it. And the other day, that happened. Out of nowhere, in the middle of my motivational interviewing class, I was panicking like the Pima building was on fire or something and I didn't really know why. And since I didn't really know why, I really didn't know what to do about it, or how to make myself feel better. The panic continued. Until.

I pulled out a sheet of paper and I started writing. I didn't care what my handwriting looked like or whether my punctuation was correct or whether the girl next to me thought I was having a psychotic break. I didn't write my own words, I didn't journal or write out my feelings or write a letter or even write out a prayer. I wrote a hymn. I let my pen sing the lyrics right there onto the paper and I let the rhythm of the familiar tune - floating through my mind, taking the sting out of worry and doubt and fear - soothe my very soul. 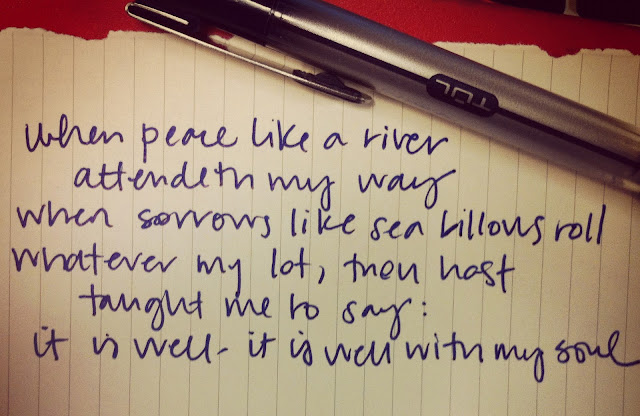 I am seriously tearing up at my desk. This is so comforting, beautiful, and powerful. Thank you :)

I happened to be listening to that exact hymn on my playlist when I read your article today- thank you for speaking about peace in the midst of your panic. I needed to hear that today.