how to express sympathy, per my opinion

There's going to be a swear word (albeit a bleeped one) in this post. Normally I don't condone swearing on the blog, but sometimes, swearing is all you can do, and this is one of those times. I know you're all old enough to handle it, but I felt like I should warn you anyway. 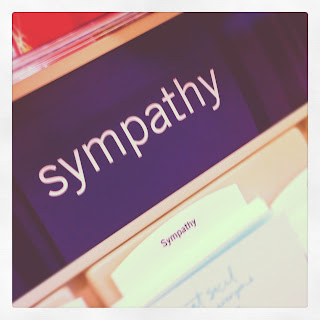 I shop for greeting cards kind of a lot. When I got tired of shopping for them so much, I just started making them myself. I love greeting cards, is my point, because I love handwritten sentiment in all its forms. I love love love it. There is an obvious exception to that rule, however, and that exception is the sympathy sentiment. In all my ventures to card and stationary stores, if I find a good sympathy card - and by "good" I mean "doesn't make me want to put my fist through a brick wall" - I always buy it. Because my GOODNESS I'll be darned if sympathy isn't the hardest and worst thing to try convey in words ever, and if someone manages to do it well, I'm gonna jump on that.

Before I had a loss in my life that was major, I was so awkward about sympathy. What do I say? What do I not say? And I was awkward because it is awkward, that's why, and there is nothing, and I do mean nothing good to say in the face of grief. I always thought there was, but I just didn't know it. I thought I'd learn it in seminary, in my counseling degree; no such luck. But when it happened to me, when I was the one people were avoiding and awkwardly stumbling over their words around, I realized something important. There's nothing good to say. There's just not.

Here are a few of the things I have learned, though. First is what I just said. Since there is no code or formula for magical helpful words that will make the pain go away for the person you're comforting, or attempting to, there's no pressure or expectation that you need to try and fix anything. It's not about fixing it so much as it is about being there. Sitting in the mess, wading through the wreckage. Holding hands and crying or laughing or both, as the case may be. No matter how well-meaning, people say really stupid things sometimes in these situations, and that just is what it is. But not showing up at all hurts worse than any of them. Be available. That's what counts.

The other thing I learned - and this might be the most important - is to not try and be something you're not. Don't worry about being eloquent if you're not eloquent. Don't worry about saying the right thing because there isn't a right thing. Don't try and manufacture a Hallmark card sentiment if that's not your style. And if it is your style, by all means, hit me with your best shot. If you bake casseroles, bake a casserole. If you are more comfortable doing things, offer to go grocery shopping or something. If you've lost someone too, empathize, share; and if you haven't, it doesn't mean you're not qualified to listen. Only two things are important, in my opinion and experience, and they are these: show up, and then be yourself. If it's ugly and awkward, fine. As long as you're there and it's genuine, I'm still going to love you for it.

The summer after Audrie died, I went to a college friend's wedding in Dallas. Some people knew what had happened in my family and said nothing, other people clearly didn't know anything, some said the kindest words, and others hugged me just a few seconds longer than felt usual so I would know that they knew, that they cared. A sort-of-mentor of mine from college was there, too, and I think I wasn't sure if he knew or not. Two things I can say without a doubt about that man: he is present and he is genuine, without fail. And I will never, ever forget: we were standing in line for the appetizers. I didn't even realize he was behind me until I heard a low voice, just loud enough to be deciphered over Sinatra crooning from the speakers mere feet from us, say to me:

You know what? F*ck cancer.

He gave me a quick hug, and that was it. It wasn't eloquent, or constructive, or even very appropriate.

And it was perfect.

Show up. Be you. That's all anyone who's hurting wants or expects from you. I promise.
Posted by auntmeggie at Friday, February 17, 2012

This is perfect. And so, so true.